So you’re probably asking what do I mean by root a grown cycad caudex, or better yet just what is the caudex.  The caudex of a cycad is the stem or trunk of the plant that stores energy which has the root system attached to it as well as where the leaves attach to.  Essentially a cycad caudex is the main part of the plant, and for some species the majority of it is underground while others are visible above ground. 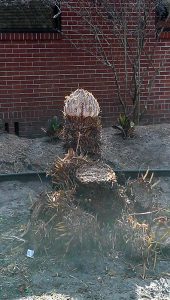 Tom Broome wrote in his article “Never Throw Away A Cycad” that any cycad can be cut up into pieces and used to grow a new plant.  Many when people remove the offshoots or “pups” as they are called on some varieties and root them to form new plants.  Additionally, when large cycads are transplanted from one location to another often times the majority of the roots.  But what happens when a mature cycad is damaged, cut down or even rotted?  Will this form new roots and continue growing as it did before?  The answer I’m told is yes. 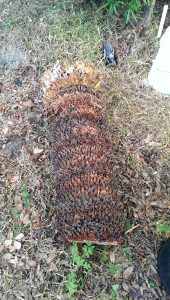 So about a week ago I was driving to a local store when I spotted what appeared to be a large cycad caudex on the side of the road.  I pulled and sure enough it was.  Apparently someone had chopped several off a multi caudex Cycas revoluta, but this was the only one left.  It had appeared to have been there for some time as the wound from the cut appeared to have healed over.  So with the help of my son we loaded it into the back of the truck and brought it back home.

Being one who always enjoys experimenting, I let it sit for another week then planted it into the ground.  I most likely will move it into a pot of pure sand when I get the chance, being that this is a Cycas revoluta and is one that I have plenty of in my collection.  So should I successfully root a grown cycad caudex, this one will be going up for sale. 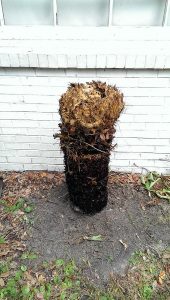