We’ve all experienced it.  A bag of store bought potatoes that have sat in the pantry too long and now have weird growths coming out of them!  Well that my friend is the start of the potato trying to what nature intends for it to do and that is produce new potatoes!

Yes, there’s lots of information out there, and after having this occur to me recently I decided to once again experiment.  However, being that it is January in Florida, I did not want to plant them in the ground.  So I decided to grow my potatoes from store bought potatoes in buckets. 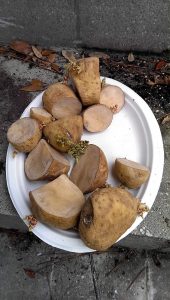 Potatoes after they have been quartered and allowed to dry

So before you just put the store bought potatoes into some dirt, you first need to prep them for planting.  For this experiment I cut them in quarters, leaving a few “eyes” on each piece, as this is where the new plant will start to develop.  After this I placed the pieces on a paper plate, covered them with a paper towel and put them in a cool, dry place.  Doing this will allow the fresh cuts to dry and reduce the chance or it rotting when planted.  After about a week you should be ready to plant and grow potatoes from your store bought potatoes.

In a few weeks you should see lots of new, green plants shooting up from the soil.  Once these shoots get to about 4 inches tall, gently add more dirt to cover all but about an inch of the new growth then water in.  Keep doing this until the dirt is filled all the way to the top of the bucket.

In about 10 to 12 weeks you can begin harvesting your new potatoes that you grown from store bought potatoes!

Be sure to use a good potting mix 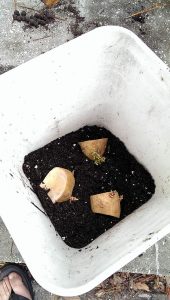 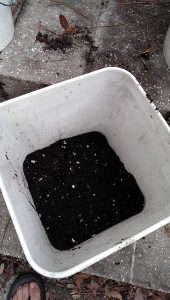 Soil placed on top of potatoes