Back in 2008 I paid a visit to Chuck Theroux in New Smyrna Beach, Florida.  He runs Bountiful Earth and has the largest collection of bamboo in the upper half of the state.  The trip was two fold; to help him dig some bamboo for his retail operation and to attain more bamboo for my personal collection!

The bamboo I selected on this particular trip was Dendrocalamus validus, a newer introduction to the United States via Thailand.  What made me want this bamboo was seeing Chuck’s Dendrocalamus validus that he had growing in his backyard, as the culms were nearly 5 inches in diameter and the height nearly surpassing the old oaks that were growing on the property!  Along with that, it had displayed a beautiful shade of orange that created a striking contrast on the green culms.  You can see from the picture on the right just how lovely this bamboo is and the size.  Those are three gallon pots next to the bamboo, so you get the idea truly how large this tropical clumping bamboo really is.  So it’s easy to see how I fell in love with this bamboo. 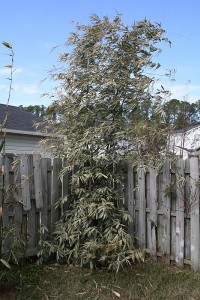 Now for the sad part of the story.  I live in northeast Florida, and unfortunately for me our winters are much colder than the lower half of the state.  I was excited when shortly after planting it in the ground it produced 1 inch culms that were about 12 feet tall.  However, that winter we had seer lows that dipped into the teens, and the result was devastating.  almost instantly the leaves turned a light green as a result of the freezing temps, and as the winter months went on the culms slowly turned light brown.  The end result was the entire plant died back to ground level.  You can see the devastating effects that the cold has on this bamboo in the picture to the left.

As winter led to spring, I continued to watch for signs of life in the bamboo.  Much to my surprise it developed some new branching on the lower part of the culms (which I had thought for certain were dead).  This created a mound of green leaves, making it look more like a bamboo shrub than what it truly should look like.  The following months I continued to watch for signs of new shoots, and finally in late July two new shoots popped up out of the ground!

So anyways, this cycle has continued now for the last three winters.  Winter comes, freezes the Dendrocalamus validus, resulting in it’s re-birth every spring and summer.  Quite a cycle, but not one that I had hoped for.  What I had really hoped for was for people to see it, stop and ask about it.  Perhaps in the next few years global warming will accomplish this for me, but until then I guess I’ll just keep searching for a giant clumping bamboo that is not affected by the severe cold such as this one. 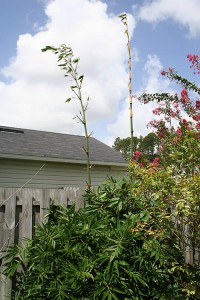 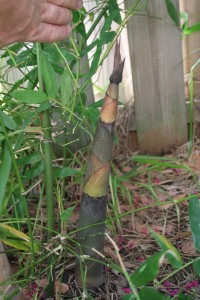 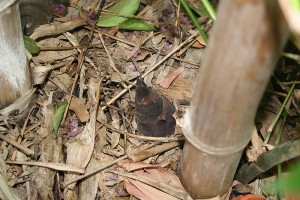