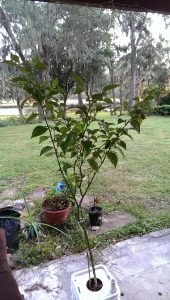 With my love of hot peppers, I started growing Carolina Reaper pepper plant some several months ago.  In my previous post from May 2016, Growing Carolina Reaper Pepper Plant, I mentioned that I acquired this thanks to a good friend of mine who also happens to love hot peppers.  It’s now November, and watching this grow from a tiny little plant to a near 5 foot monster certainly has been interesting.  From the excitement of seeing the first flower to the joy of finally developing peppers, it has definitely been an interesting journey.

My Carolina Reaper pepper plant was potted in what most call a self watering bucket system, which I’ll detail more of in another post.  I used seasoned dirt and top dressed it with rabbit manure.  This seemed to do the trick because in no time the pepper was off and growing.  When compared to the two others that were growing the same plant, mine out grew theirs 3:1.  So apparently my grow system worked far better than what they were doing.

When the first flowers appeared I was ecstatic, as I knew that peppers would be on the way!  However, this turned to frustration as the weeks went on with the plant flowering but no peppers being produced.  I moved the plant out of the green house and onto the patio, thinking maybe nothing was pollinating the flowers, even though peppers are supposed to be self pollinating.  Then one day I finally noted a small little pepper head developing, and the excitement that was generated would have had one thinking I won the lottery!

But my Carolina Reaper pepper plant continued to somewhat let me down after that.  It continued to flower, but only produced seven peppers in total.  I guess this is not too shabby, however, I was truly hoping for many more.  With cooler temperatures in the air, I moved the pepper back in to the greenhouse to continue the growing season.  Once I harvest the peppers I plan on trimming it back in hopes of forcing more growth along the bottom to make it bushier and propagate the cuttings to increase my plant count. 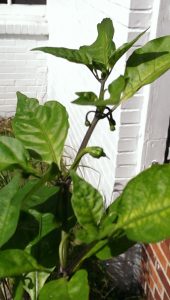 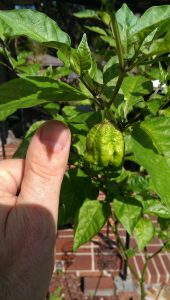 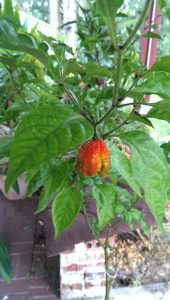 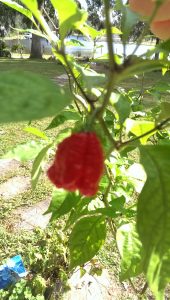