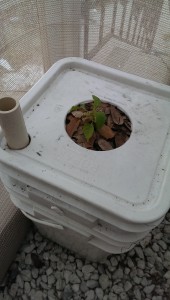 Well for those that know me I love hot sauce, and all too often the hotter the better.  I put hot sauce on my eggs, meats, chicken wings (of course) and much, much more.  Well two years ago I grew enough peppers to make my own sauce, which of course I aptly named it “Scott Sauce”.  I even had enough that I swapped some with a few co-workers for their hot sauce just to have a different variety.

Well one of those co-workers asked if I would like to get a Carolina Reaper pepper plant.  I immediately agreed to the purchase and waited patiently for my plant to arrive.  Well the Carolina Reaper pepper plant arrived early in April and I immediately planted it in a seasoned self watering bucket system, top dressed it with rabbit manure & oak leaves then set it in the corner of the green house.  As you can see in the picture to the right it was very big, and to be honest I was worried that this little pepper was not going to make it! 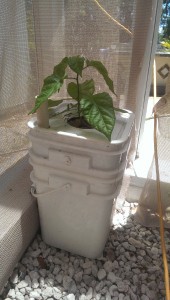 But alas the little Carolina Reaper did survive, and looking at it today I am amazed at how much it has grown since it was first planted!  It proudly stands nearly a foot tall with lush, deep green leaves as shown in the picture on the left.  Looking out the window right now it seems that the pepper has produced yet more leaves since the picture was taken.  For those that are not familiar with the Carolina Reaper pepper plant, it is a cross between the ghost pepper and a red habanero pepper and holds the Guinness Book of World Records for world’s hottest pepper.  I for one cannot wait for this to start producing peppers so I can make the hottest “Scott Sauce” in the world!  Look for future updates every month on how this pepper is growing…