More commonly known as Emerald bamboo it Weavers bamboo, Bambusa textilis mutabilis is a very erect, deep green bamboo that presents a classic Asian look. New culms have a whitish powder that persists for the first year or two before fading to display the deep emerald green color as it matures. Semi open tropical clumper with small branching which makes gives a nice screen effect. Culms will grow to a height of about 35 feet and 2 inches in diameter and is cold hardy to about 20 degrees F.

Previously just known as Bambusa mutabilis, discussions have said it to be very similar to Bambusa textilis, this the reason for the slight name change to Bambusa textilis “Mutabilis”, even though the two have many distinct features.

As you can see from the pictures below, this bamboo has filled in nicely in just 5 years, creating a very nice screen and effectively blocking out the neighbor’s behind my yard. This bamboo suffered zero visible cold damage in 2010 when temperatures reached 18F in my yard.

Below you will see visually what you can expect from this bamboo over the years.  The first planting was in 2004 and the final picture was nine years later in 2013.  It should also be noted that by 2013 I had also probably taken dozens of divisions of the plant, so had I not done that the footprint would be much larger. 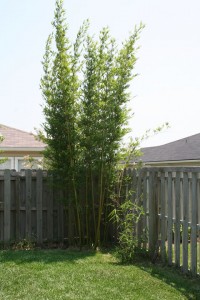 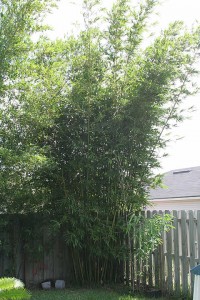 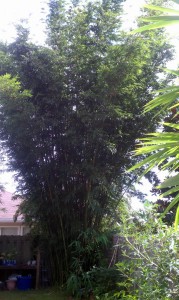