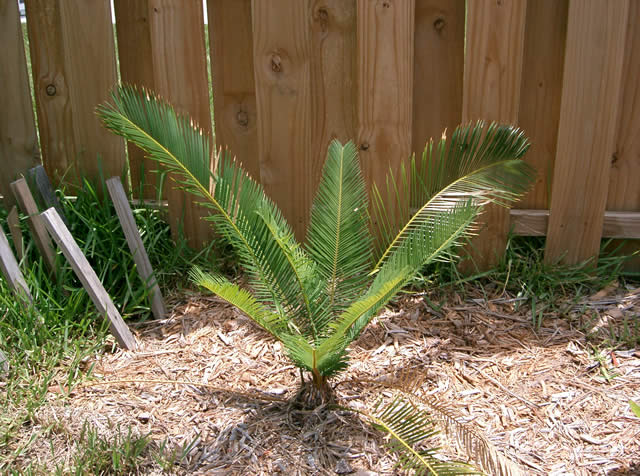 Nine months ago my family moved from the house we had been in since November 2003.  In 2004 I planted my first cycads on the property, and these consisted of two Cycas revoluta, one Cycas taitungensis and one Dioon edule.  The Cycas taitungensis was purchased from a vendor on eBay and I recall that the caudex was about 3 inches wide.  It was planted in what was a sunny location at the time and flourished nicely over the next decade.  Then starting in 2002 it produced it’s first male cone, and not wanting to waste the pollen I quickly pollinated several female Cycas revoluta plants with it, hoping it would take and thus produce hybrid cycads.  Much to my surprise it did, but that story is for a different post!

So as I mentioned above in 2015 we moved from our small lot planned urban development house to nearly an acre on a local river that leads directly to the St Johns river.  Not wanting to leave my prized male Cycas taitungensis along with my two headed Cycas revoluta behind, I dug them up and moved them to our new homestead.  Some words of advice…digging mature cycads is not an easy task, so be prepared for some back breaking labor!

So with that I’ve included below pictures of the Cycas taitungensis growth rate from initial planting in 2004 to when it was placed in it’s new home on the river.  Based on my measurements in eleven years it went from no visible trunk to approximately 15 inches of clear trunk, which makes it approximately 1 inch per year AFTER the stage at which it was planted in the ground.  These plants when grown from seed first grow out the caudex and develop underground before shooting skyward, so if you are at this stage I would probably add on at least an additional five years.  With this I was also not consistent in fertilizing, so this could have an impact on growth rate if.